Starfield is a Role-Playing Game and its developers may give us complete freedom to customize our character. Since it may be set in our actual solar system, the customization may focus on creating human characters only. Various NPCs such as a wide range of alien races, robots and even an AI could also appear as the player discovers different planets and different cities. On this page, we will be adding updates and information for the Character Creation feature of Starfield.

As per Todd Howard, game director of Starfield, stated in a Reddit AMA that as for the Character Creation in the game, he is very excited about what the team is developing which includes background, skills and more. Players will choose their character's background, with many options for customization that will impact how certain events in the game will unfold. Players will also be able to choose their own pronouns (he, she, they) and all relevant dialogue will support this choice.

Since the game is touching on an intergalactic universe, there has been some speculations going around that we might be able to customize alien races for the player's character instead of just human beings. Bethesda has always been incorporating their own character creation into their games, where you can change your character's appearance and attributes, you make that character your own, someone you define. And seeing that the game takes place in the distant future of our world, it would be exciting to see if they could incorporate genetic engineering into the mix, where player could take genes from a different species, combine it with others, or even their own.

Three tabs in the Character Customization screen allow you to alter how your playable character will look - they are the Biometric ID, Body, and Face tabs.

When first reaching the Character Customization screen, players will land on the Biometric ID tab. This tab offers the player at least 14 pre-set character loadouts with a note saying that character appearance can be changed anytime when visiting a genetics facility.

From the gameplay trailer, it does not appear as if customizing an alien character is possible.

The Body tab allows the player to adjust their character's body. You can toggle your character's Hab Suit on and off while previewing this tab. It is uncertain whether different body types will affect certain aspects of gameplay.

These are the following changes you can make under the Body tab:

You are able to alter your character's facial appearance under the Face tab.

These are the following changes you can make under the Face tab:

Under Background tab, you can choose your character's 'starting class'.

Classes in Starfield will be covered on this page. In assumption, this could play an important aspect of the game where players can choose unique classes that suit their playstyle. Similar to Mass Effect: Andromeda, classes may be swapped at any time and this tactic can be used as an advantage when facing difficult enemies. You can find all the relevant information and updates on Classes featured in Starfield on this page. 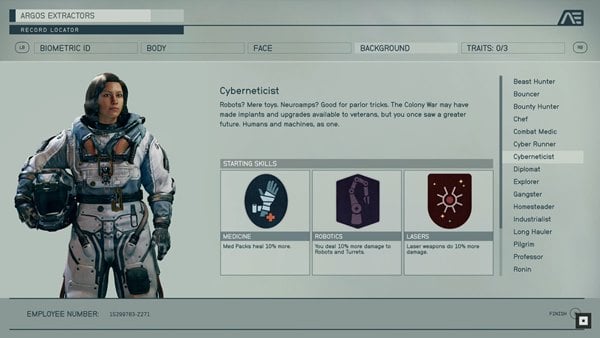 "While the unrefined masses scarfed down Chunks by the shipload, you catered to those with a more... discerning palate. In your kitchen, countless alien species became true culinary masterpieces."

"Leave it to human beings to fight over something as infinite as outer space. That's where you come in. You've never been afraid to take on the enemy... but you'd much rather take care of your friends."

"From Neon to New Atlantis, the megacorps stand as monument to power, prestige and profit. You've worked both for and against them, on the inside and out, often sacrificing conscience for credits."

"Robots? Mere toys. Neuroamps? Good for parlor tricks. The Colony War may have made implants and upgrades to veterans, but you once saw a greater future. Humans and machines, as one."

"The wars are over. Peace no reigns the Settled Systems. But only because there are those quietly fighting to keep it. Because of you, agreements were signed, words were heeded... lives were spared."

The final tab in the character customization screen is the Traits tab.

Traits in Starfield refer to optional additional attributes you can give to your character during Character Creation. Each trait provides the player character with its own unique advantages and disadvantages to gameplay. You can select up to 3 traits, but do note that some traits cannot be equipped together. You can find all the relevant information and updates on Traits featured in Starfield on this page.

Examples of traits that are incompatible include those with directly conflicting effects (such as Introvert and Extrovert), different faction allegiance traits, and different religion traits. Like backgrounds, it is possible that certain NPCs will react to and have different dialogue based on the traits you have chosen.

Traits come with negative effects to gameplay and so it is natural that some players may be unhappy with their initial character build later on in the game. Instead of needing to restart the game to remake your character's Traits, there will be quests available in-game to completely remove any unwanted traits.

Your parents are alive and well, and you can visit them at their home. But 10% of all the money you earn is deducted automatically and sent to them.

You grew up on the mean streets of Neon. You gain access to special dialogue options, and better rewards from some missions on Neon. Crime bounty by other factions is greatly increased. (Can't be combined with any other faction allegiance trait.)

You grew up as a member of the Enlightened. You gain a significant discount at the organization store, but lose access to Sanctum Universum store. (Can't be combined with any other religion trait.)

You grew up as a member of the Sanctum Universum. You gain a significant discount at the church store but lose access to the Enlightened store. (Can't be combined with any other religion trait.)

You grew up worshipping the Great Serpent. Grav jumping provides a temporary boost to health and endurance, but health and endurance are lowered if you don't continue jumping regularly - like an addiction. (Can't be combined with any other religion trait.)

Your body has become acclimated to space. Health and endurance are increased when in space, but decreased when on the surface. (Can't be combined with Terra Firma.)

You own a small home on a peaceful little moon, but it comes with a 50,000 credit mortgage with GalBank.