Starfield is an upcoming single-player Role-Playing and open world game set in space, inspired by games such as space flight simulator SunDog: Frozen Legacy and table-top RPG Traveller. The game is being developed by Bethesda Game Studios and published by Bethesda Softworks, the studio that has brought life to the Fallout and The Elder Scrolls series. Starfield is the first new universe in 25 years from Bethesda Game Studios. In this next generation role-playing game set amongst the stars, create any character you want and explore with unparalleled freedom as you embark on an epic journey to answer humanity’s greatest mystery.

Starfield was introduced to the public at Bethesda's E3 Conference in 2018 and it is briefly described by Todd Howard, Director at Bethesda Game Studios, that Starfield is the first and new IP developed in 25 years and that it is a unique game that they are excited about. The game was originally planned to be released on November 11, 2022, but was later delayed to the first half of 2023.

The year is 2330. Humanity has ventured beyond our solar system, settling new planets, and living as a spacefaring people. From humble beginnings as a space miner, you will join Constellation – the last group of space explorers seeking rare artifacts throughout the galaxy – and navigate the vast expanse of the Settled Systems in Bethesda Game Studios’ biggest and most ambitious game.

Starfield is set in a science fiction theme and it may be in an actual universe that could possibly start with our own solar system. Players will be granted complete freedom when it comes to customization of the character, weapons, armor, home bases, and the ships used.

The developers have also introduced a larger environment that is even bigger than the Fallout and The Elder Scrolls series' map. Players will be able to travel between different planetary systems and various planets to encounter different cities and alien races, with a potential in joining various factions. Not only will Starfield feature a bigger map than previous Bethesda games, but also more in-depth NPC interactions with over 252,953 lines of dialogue compared to Skyrim and Fallout 4's 60,000 and 111,000 respectively. As the player discovers different planets in the solar system and connect with all types of characters, we may unfold and learn a story that has never been told.

On June 14 2022, Bethesda released a gameplay reveal video showcasing many of the game's key mechanics. Read about it here.

Explore Bethesda's largest world yet, with over 100 planetary systems, and within them, over 1,000 planets. Each planet is unique, with distinct atmospheres, different lifeforms (or a lack thereof), a wide variety of resources to collect, and diverse biomes and environments to experience. 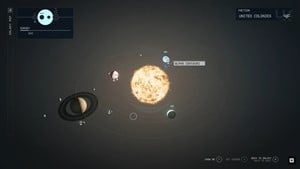 Discover the truth about the mysterious artifacts scattered around the universe. Join factions to gain allies that align with your character's beliefs and motivations, and battle against foes who are after the same things that you are reaching towards. Players will feel a greater sense of connectedness with Starfield's world with it's improved dialogue system. Instead of merely having to choose between a selection of four dialogue choices, players will have the opportunity of persuading and swaying NPCs towards their viewpoints. 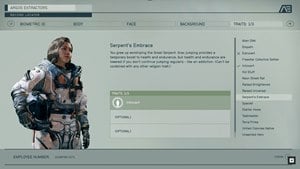 Tweak all the small details from how your character walks, to quirks they might have, to their profession before the events of the game. Choose carefully, however, as your choices will affect how people will react to you, and what opportunities will be open to you as you progress through the game. Have a trait you're not fond of? No need to worry as the game will feature a quest system that will allow you to completely remove a trait without having to restart the game to remake your character.

Utilize all the resources you find from exploring various planets in the game's deep crafting systems. Create equipment that enhances your exploration abilities and weapons and armor crucial in fending off hostile alien life. 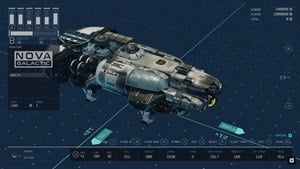 But its more than just crafting weapons, consumables, and equipment. Build and design your own outposts - bases on planets you visit that provide you shelter and other services while on a foreign planet. Customize the look, layout, and functionality of your own spaceship using the various ship modules provided. Hand-pick the trusty crew that will help with maintenance in both your outposts and ship. You can find elements of hard sci-fi settings in the game tailored to feel rewarding to the player.